In this post, we will look at the architecture of Self-Driving Cars (SDC) – or Autonomous Vehicles (AV), as they are alternatively called – and the various sub-systems that make it work.

At a high level, AVs have four critical subsystems: Sensors, Perception, Planning, and Control. These subsystems act together to perceive the environment around the AV, detect drivable parts of the road, plan a route to destination, predict behavior of other cars or pedestrians around it, plan trajectories, and finally execute the motion: drive smoothly and safely. Let’s see how these systems work. 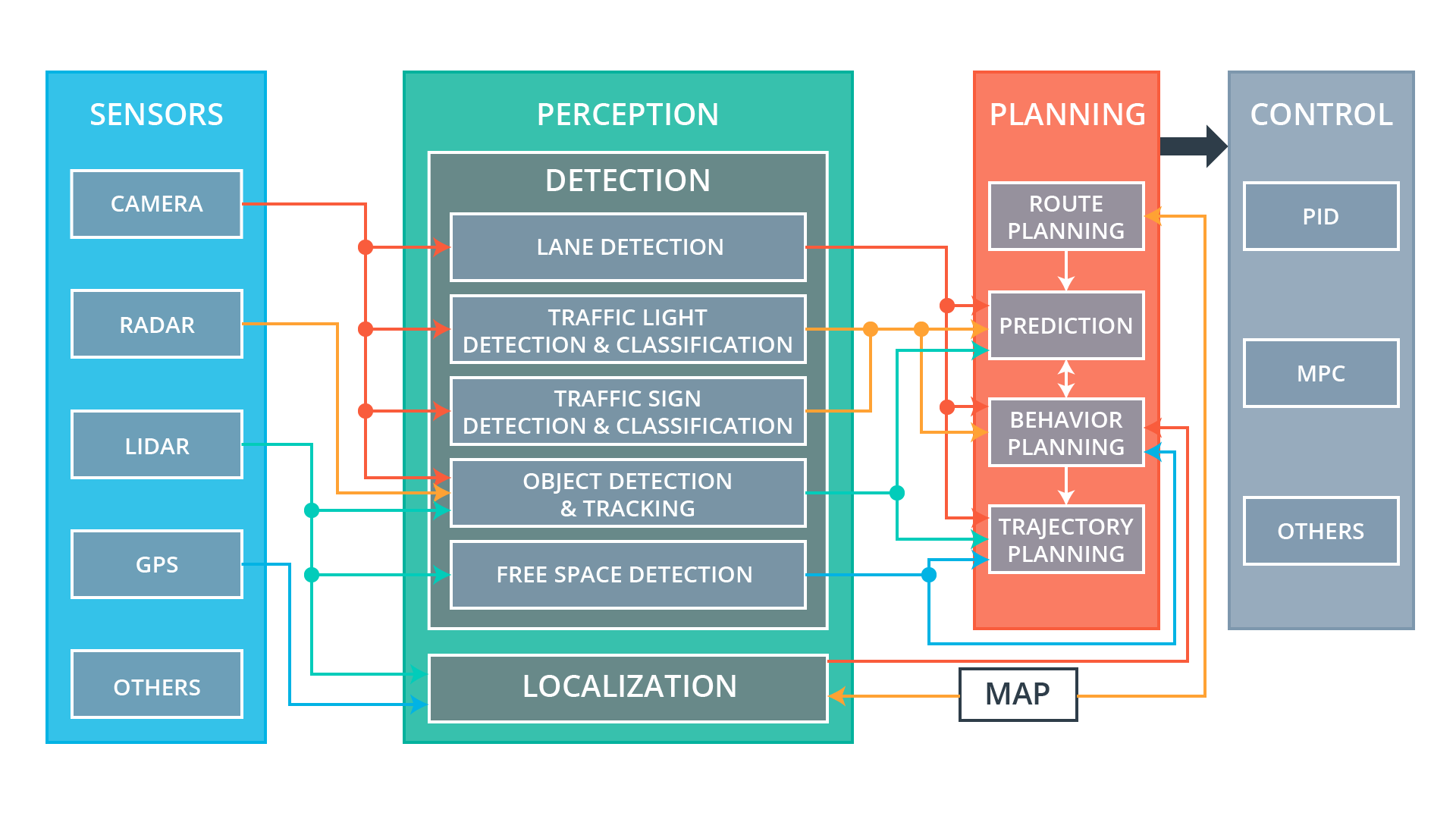 The sensor subsystem consists of various hardware sensors that gather data about the environment. These include Radar, LiDAR, GPS, Camera, and others. 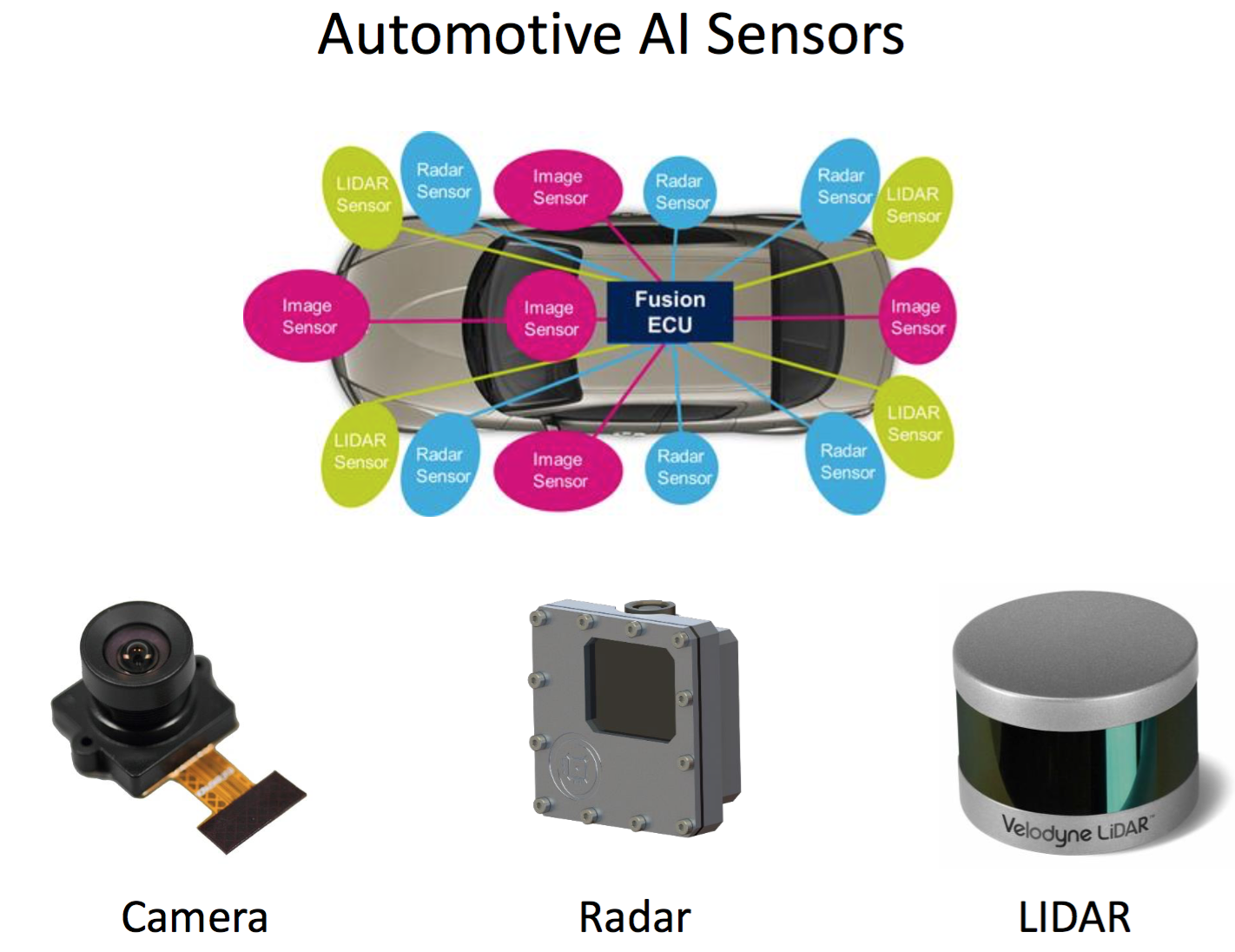 Waymo’s cars show its sensors and where they are mounted. 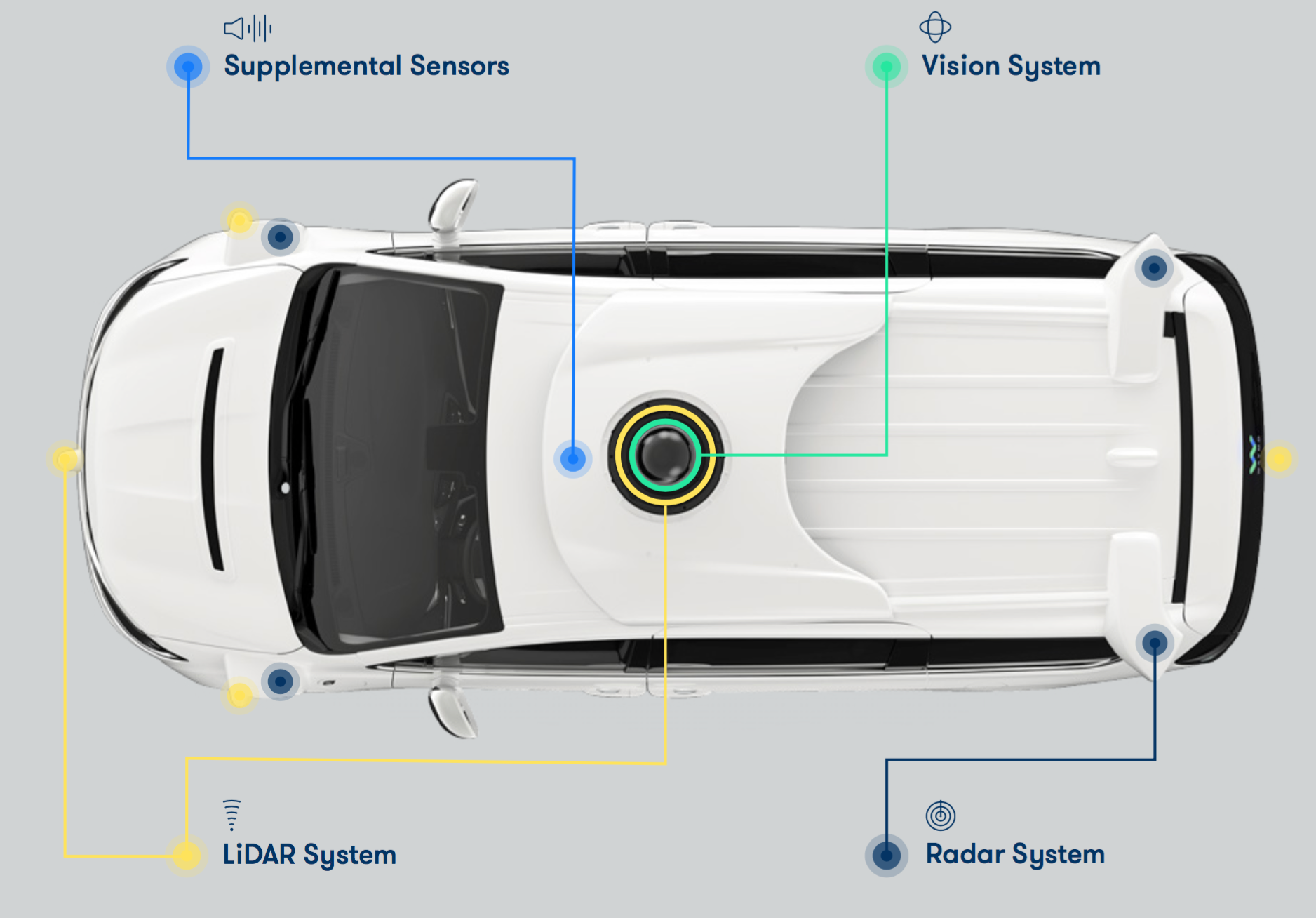 Camera (image sensor) is perhaps the most important sensor. Typical AVs will have both front-facing and rear-facing cameras, often multiple instances of these, and might also have side-facing cameras. Cameras are used to “see” things around the AV – roads, other vehicles, pedestrians, bikes, etc.

Cameras have high resolution, are cheap (hence multiple units can be easily installed), can collect lot of data, therefore are useful for deep learning.

However, trouble with cameras is they are:

Radars are the most common automotive sensors for object tracking and detection. They are cheap, do well in poor weather as well, but have low resolution, though at 100-150m range.

Lidar (laser detector) works on the same principle as radars do, except they emit lasers at a high frequency (50-100 times/second). They offer extremely accurate depth information, a full 360 degree view, and have higher resolution than radars. But lidars are also extremely expensive. Typical range of lidars is ~150 meters. Lidar data is typically a point cloud of information.

GPS sensors are the common positioning sensors that give latitude, longitude (and altitude, where available) information. Since the resolution of GPS data is of the range of a few feet (10ft or 3 meters or more), vehicles typically use this information for long range planning rather than for short range.

The perception subsystem essentially consists of software components that take all the sensor data data, fuse them together into meaningful, structured information, via Sensor Fusion, and attempt to understand the environment around the AV.

Broadly speaking, perception can be divided into two key components: localization and detection.

Localization This system uses data from mainly from GPS and maps (and possibly other sensors) to determine the vehicle’s precise location. This forms the basis for other, later functions.

As a practical example, Waymo’s Safety Report shows how sensor fusion and perception allow it to ask two critical questions: Where Am I? and What’s Around Me? 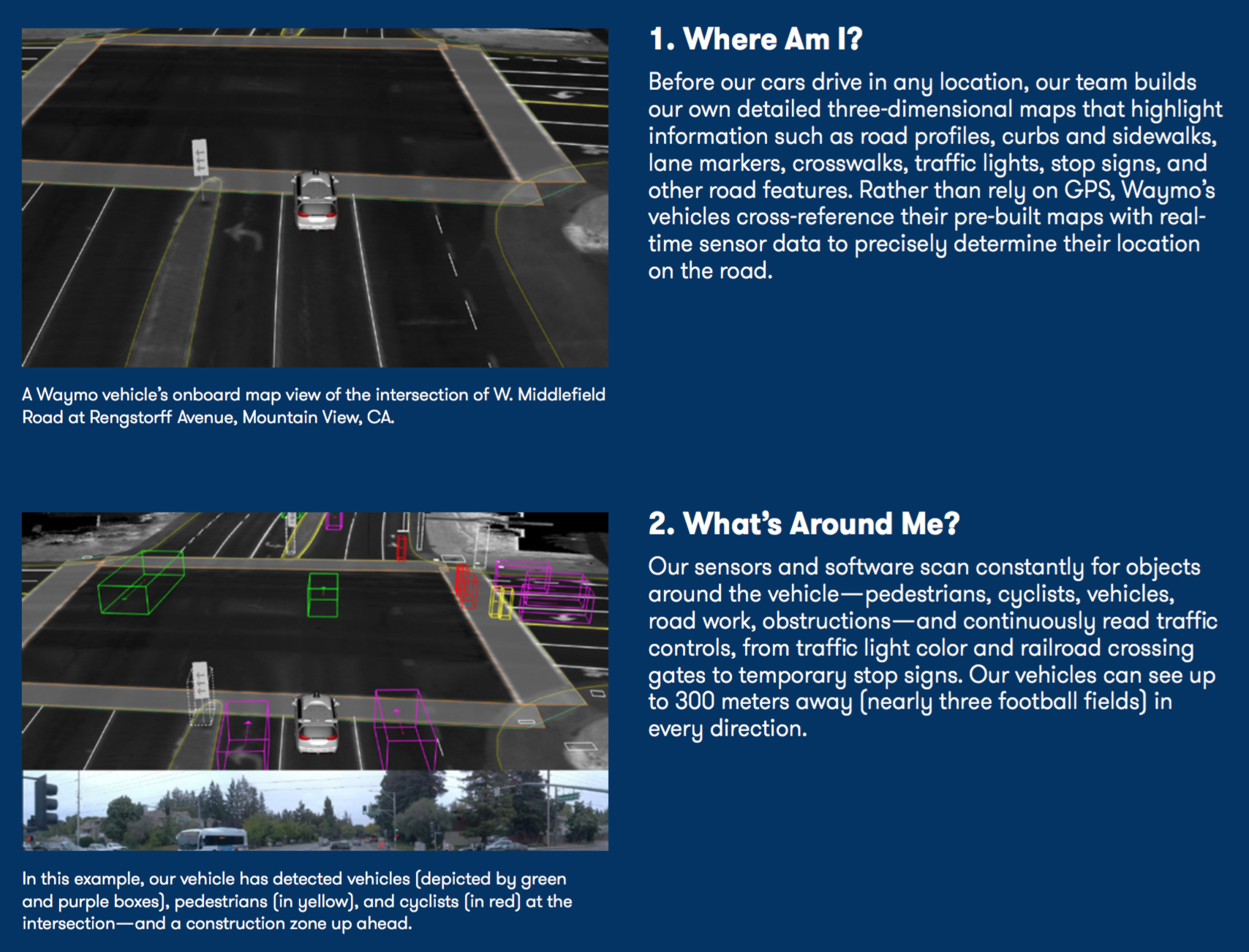 The route planner performs high-level, coarse plans about the path the vehicle should take between two points on a map, e.g. the highways and roads to take. This is similar to the navigation system on most vehicles. The route planner takes information chiefly from the map and GPS.

The prediction component predicts the behavior of other vehicles, obstacles, pedestrians on the road in the vicinity of the AV. It uses probabilistic models to make educated guesses about their next positions and future trajectories. All this is done so that the AV can safely maneuver itself around them.

The prediction component takes information from components such as the lane detector, traffic light and sign detector/classifier, and object detector/tracker.

The behavior planner then uses information from the predictor, and sensor fusion data, to plan its own behavior, such as keeping in the existing lane, or to change lanes (to the right/left), or brake at traffic light, or accelerate as needed.

The trajectory planner takes the behavior planner’s immediate planned behavior, and generates multiple (dozens or hundreds) trajectories, all the while while keeping track of user comfort (e.g. smooth acceleration/decelration, no sudden jerky movements), road rules (e.g. speed limits, etc.), vehicle dynamics (e.g. body weight, load, etc.), and determines the exact trajectory to take. This trajectory is passed on to the control subsystem to execute as a set of commands.

Continuing Waymo’s example, we see how Prediction and Planning components help Waymo answer the two following questions: What Will Happen Next? and What Should I Do?

The control subsystem is the final system, which takes commands from the planner, and actually executes them - via acceleration/deceleration (i.e. throttle), braking, or steering. It ensures that the vehicle follows the trajectory it receives from the planning subsystem.

This completes the cycle of information from sensors to actuators, and is repeated endlessy while the vehicle is in operation.