Late in summer 2017, Bosch, one of the leaders in automotive components, threw a challenge to Udacity learners. 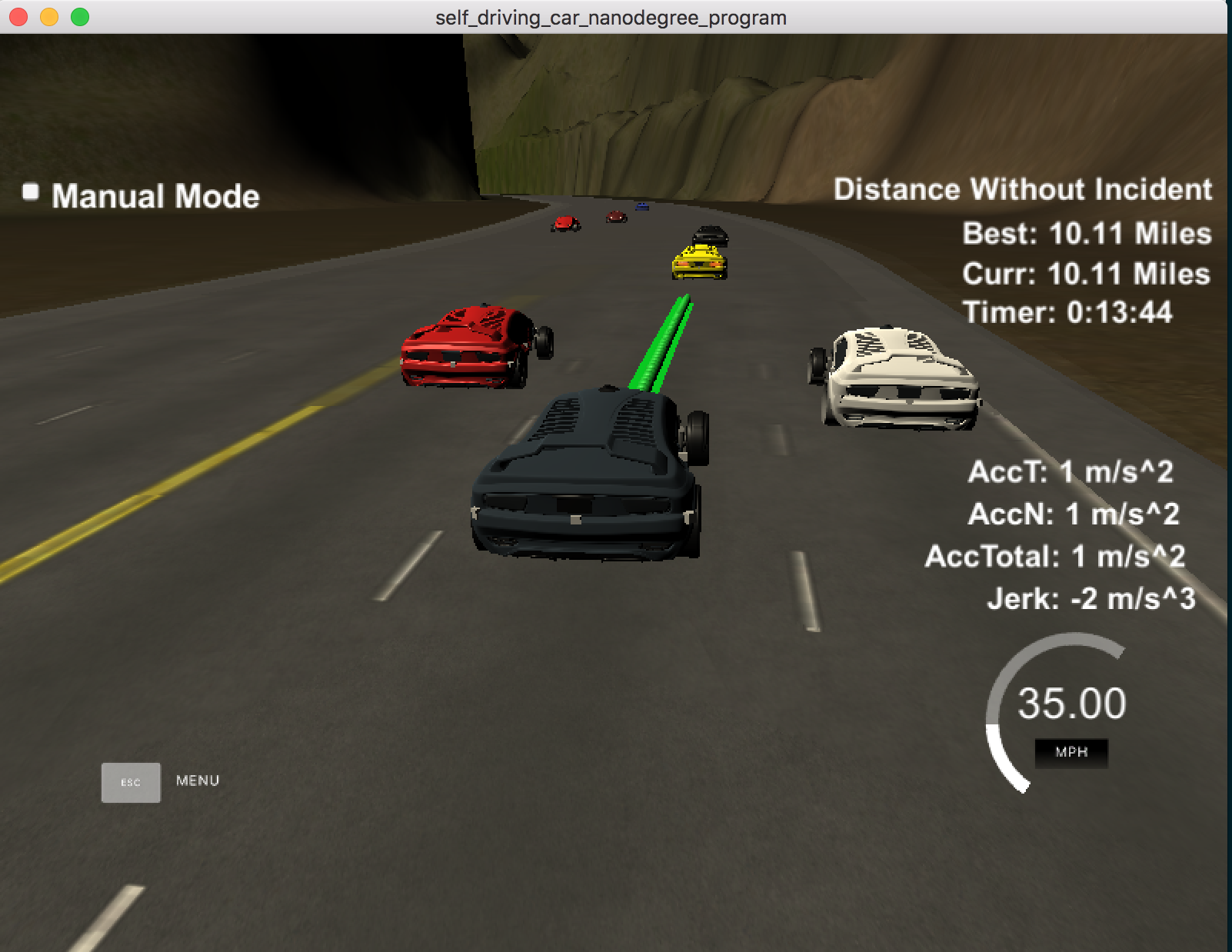 The aim of the challenge was to have a (simulated) car drive itself autonomously along a three-lane, 7-km highway loop, in traffic, without colliding with other vehicles on the road. The autonomous vehicle (called the ego car) should observe all the rules of the road:

In order to achieve a safe and smooth autonomous driving experience, the ego car must use sensor fusion data, localization, map information to accurately predict its future trajectory, and execute it correctly.

My self-driving car successfully completed the Bosch Path Planning challenge, and was one of the top 25 entries, from among hundreds of entries. 👍🚗🍾 Niiice

Check out the video below (click on the image). Best way is to watch it at 2x speed.

What is Path Planning

Path planning, also called motion planning is one of the most challenging problems in autonomous driving. It typically consists of three functions: Prediction, Behavior Planning, and Trajectory Generation.

The process model approach typically uses probabilistic methods to guess where and when each moving object will move next. Recall that sensor fusion data periodically gives our ego vehicle information about where each moving object is. Thus, the ego car predicts (with a certain probability) where other vehicles will be next, and updates its (incorrect) guesses based on (updated) actual sensor data.

The data based approach uses machine learning techniques to predict how likely some vehicle will turn right/left/go straight at an intersection, for example. This approach obviously uses a lot of training data.

Regardless of the approach used, the planner makes an (accurate enough) estimate of next positions of other, relevant vehicles.

The trajectory generator takes into account important safety and comfort variables, such as speed limit (different for highway and urban driving), maximum forward and sideways acceleration and jerk (for comfort), its own body weight, etc. The best trajectory is one that has the lowest cost (where a cost is a penalty for violating safe and comfortable driving conditions). 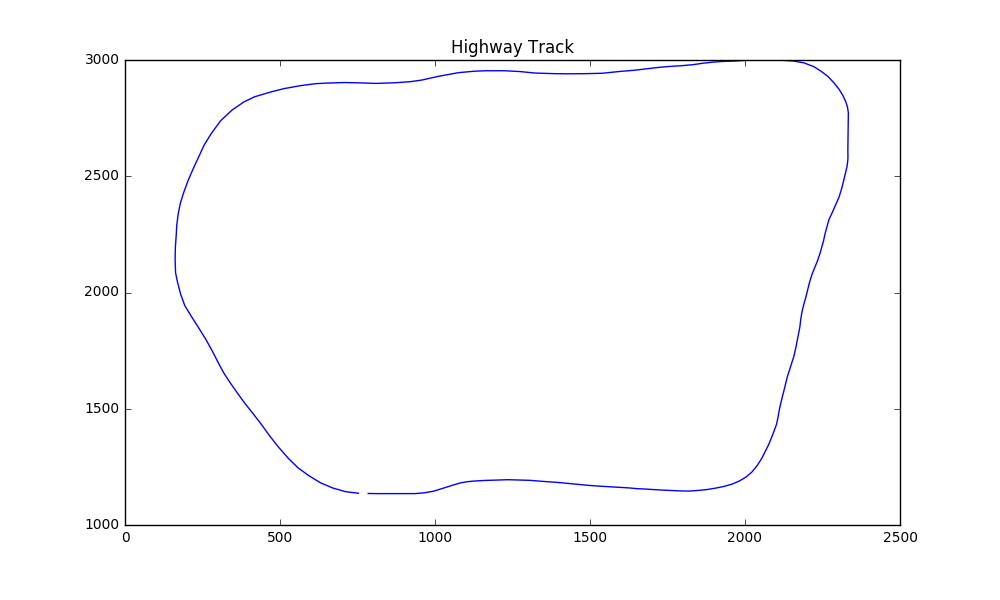 We use Frenet coordinates (s, d) instead of regular X,Y coordinates as this simplifies the path planning. In Frenet coordinates, s denotes longitudinal displacement along the road, while d denotes lateral displacement from the center (yellow) dividing line. The track is approx. 6947 meters long, thus s varies from 0-6947 (length of the track). The d value shows distance away from center divider: each lane is 4 meters wide, and there are three lanes: Left, Center, Right. Thus, the d value for Left lane will be 0 < d < 4, for Center lane (4 < d < 8), and for Right lane (8 < d < 12). Thus, the (s,d) coordinates fully specify a car’s position on the track.

The key elements of the project are broken down into three parts:

In a typical self-driving car, various sensors (LIDARs, radars, cameras, etc.) continously provide enviroment information to answer key questions: What objects are nearby? How far are they? Are they static or dynamic? How fast and in what direction are they traveling? Etc.

The simulator in this particular case provides a smaller subset of information: Cars traveling in this side of the ego car. It does not provide any info on cars in the opposite side of the road (i.e. on-coming traffic). The highway track is a 3-lane highway on each side. The ego car starts in the Center lane, and then drives itself based on near-by traffic.

In my implementation, the ego car first analyzes sensor fusion data to determine its reference velocity:

For lane change behavior, we use some simple heuristics. The car prefers to stay in its lane, unless there’s traffic ahead, in which case, it will try to find a lane it can safely move into.

As mentioned, we use Frenet coordinates (s, d) for path construction based on reference velocity and target d value for the target lane. Instead of a large number of waypoints, we use three waypoints widely spaced (at 30 meters interval) and interpolate a smooth path between these using spline interpolation. These are the anchor points. (This technique is discussed in the project walkthrough). To ensure that acceleration stays under 10 m/s^2, a constant acceleration is added to or subtracted from the reference velocity. The three anchor points are converted to the local coordinate space (via shift and rotation), and interpolated points are evenly spaced out such that each point is traversed in 0.02 seconds (the time interval). The points are then converted back to frenet coordinates, and fed to the simulator.

The ego car can safely drive around the entire track at just under 50 miles/hour, without any violations. I ran the simulator for various lengths (5 miles to 12 miles) successfully.

Here is a resulting video showing a successful 5-mile drive.

The ego car drives itself fully autonomously along the entire highway track. However, there are limitations because of the simplified logic. Since the ego car prefers to stay in its lane and test for a safe left lane first, it can get stuck behind a slow moving car if there’s traffic in the left lane, even if the right lane is empty, although it does find its way correctly. Also, at times, the ego car can switch back and forth between Left lane to Center lane, due to traffic ahead, although this too is eventually handled.

Secondly, currently only implicit costs are awarded for lane change behavior. That is, the costs are binary 0/1 if a lane is safe to move into or not. A better alternative would be using true cost functions that give varying costs based on:

Thirdly, a Jerk Minimization technique could be used that smoothes out, using a quintic polynomial, the possible trajectories available to the ego car.

Fourth, one could project the future behavior of traffic and try to predict their trajectory and thus make the car more proactive.

Code for this project is on my repo

Many thanks to David Silver and Aaron Brown at Udacity for clearing up many of the concepts. 🙏🏻